WORRIES ABOUT THE FUTURE OF ALPINE IBEX UNDER CLIMATE CHANGE 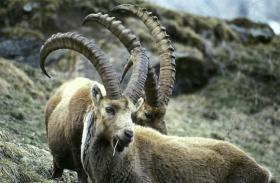 Accelerating global warming is constantly increasing the overheating risk for many organisms. Avoidance of hyperthermia and body heat dissipation are likely to drive the response by heat-sensitive species to changing climate.

Alpine ibex is a mountain ungulate that evolved and adapted well to the extreme alpine winter temperatures. These adaptations limit the ibex’s ability to dissipate heat and make them prone to overheating. Our study showed that avoidance of heat stress could exert a strong influence on the spatial distribution of Alpine ibex, even outweighing food intake in importance: when air temperatures increased, and thermoregulation became critical, ibex traded best food patches for cooler areas.

Ibex buffer against high temperatures mainly by moving to higher elevations. When the species distribution shifts toward the top of mountains, their range-size shrinks, as a result of the progressively diminishing ratio of terrain available and consequent loss of suitable habitat. In consequence of global warming, then, ibex will forage concentrated in limited areas closer and closer to mountaintops. This will have aftermaths on carrying capacity and on food availability in areas that are already characterised by low vegetation quantity and quality. In turn, the animals’ ability to acquire energy during summer, the critical period for mountain species to acquire energy prior to the rigors of winter, shall undoubtedly be affected, with important repercussions on individual life history and population dynamics.

The simulations conducted in this study showed that under the more optimistic hypothesis of a stabilisation of the anthropogenic climate forcing during the 21st century, in 90 years’ time, the extent of the areas more likely selected by ibex during summer will be less than a half. This phenomenon is expected to be more dramatic under the hypothesis of an uninterrupted increase in the evolution of anthropogenic climate forcing: in 90 years’ time, ibex will more likely be restricted to less than one third of the areas that they selected in 2011.